When you’re taking a walk through the countryside or traversing hills and mountains, what could be a better accompaniment than music? Plenty of Spotify users seem to agree that any walk needs a soundtrack, so we’ve taken a look at over 200 playlists generated by Spotify and by other users to see which songs are the most popular to listen to while hiking.

We combed through 104 playlists that had ‘hiking’ or ‘hikes’ in their title with a total of 25,000 songs to find which songs and artists popped up in the largest number of playlists.

The top songs feature a definite folky vibe with The Lumineers’ hit, Ophelia taking the top spot, having appeared 31 of the 104 playlists and boasting 332,348,873 plays on Spotify. Riptide by Vance Joy took the second spot with 28 playlist appearances.

The Lumineers also sit at the top of the list when it comes to the most featured artists, with 222 appearances across the total playlists, putting them way ahead of the artist in second place, Depeche Mode with 149 appearances.

Hikers seem to favour recent songs with just one song from the top 10 having been released before the year 2000.

If you want to make your own playlist to listen to while you take to the mountains, why not make a start with these top tracks…

When you’re done with hiking through the hills of the Lake District, what better way to relax than a treatment from our Spa or afternoon tea in our dining room or lounge? Check out our luxury breaks in the Lake District for more information on how you can explore the Lakes in style.

Ends of the Earth - Lord Huron

Mess is Mine - Vance Joy

Flowers in Your Hair - The Lumineers

All The Pretty Girls - KALEO

Down in the Valley - The Head and the Heart

Lost in My Mind - The Head and the Heart

Keep Your Head Up - Ben Howard

The Night We Met - Lord Huron

Sleep On The Floor - The Lumineers

She Lit a Fire - Lord Huron

Dirty Paws - Of Monsters and Men

The Artists That Appear In The Most Hiking Playlists 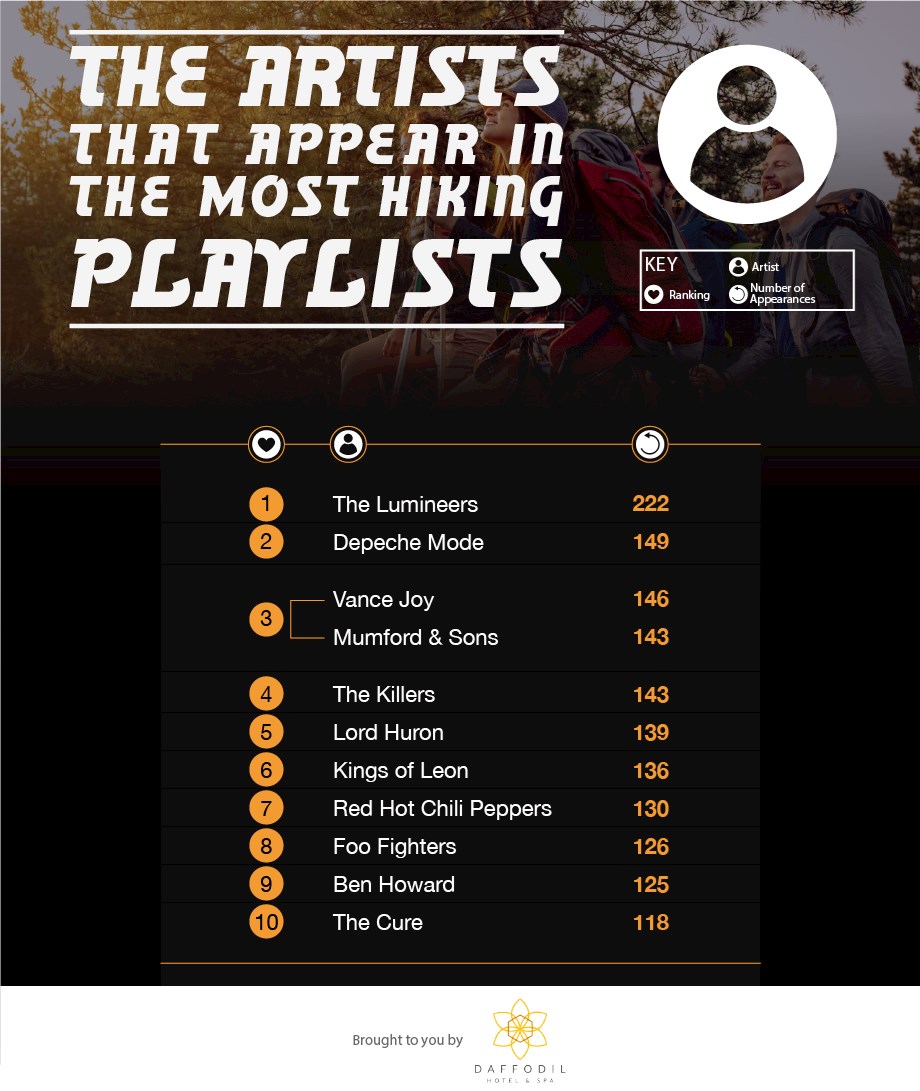 Using Spotify, we compiled a list of 104 playlists featuring 25,000 songs by searching for playlists that had ‘hiking’ or ‘hikes’ in the title. We then took this list of songs and found the frequency with which each song appeared to discover the top songs for hiking as well as the artists who appeared most often.