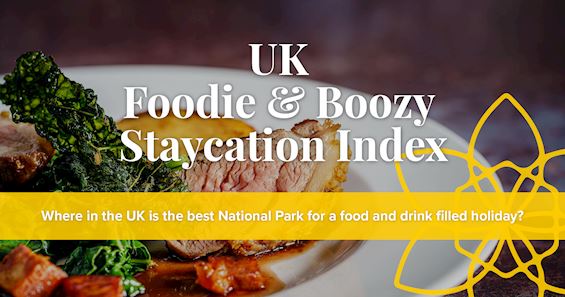 Where in the UK is the best National Park for a food and drink filled holiday?

Everyone is looking to get away for a while after the craziness of the last two years, but for some the thought of going abroad isn’t exactly what they’re after. Instead, why not stay in the UK and make the most of all the UK has to offer, including the incredible food and drink options that are available throughout our breathtaking National Parks!

Looking at a variety of factors from Michelin Star restaurants to gin distilleries and bars and pubs in all of the UK’s national parks, we’ve created the ultimate Foodie and Boozy Staycation Index to help you plan your next delicious getaway. 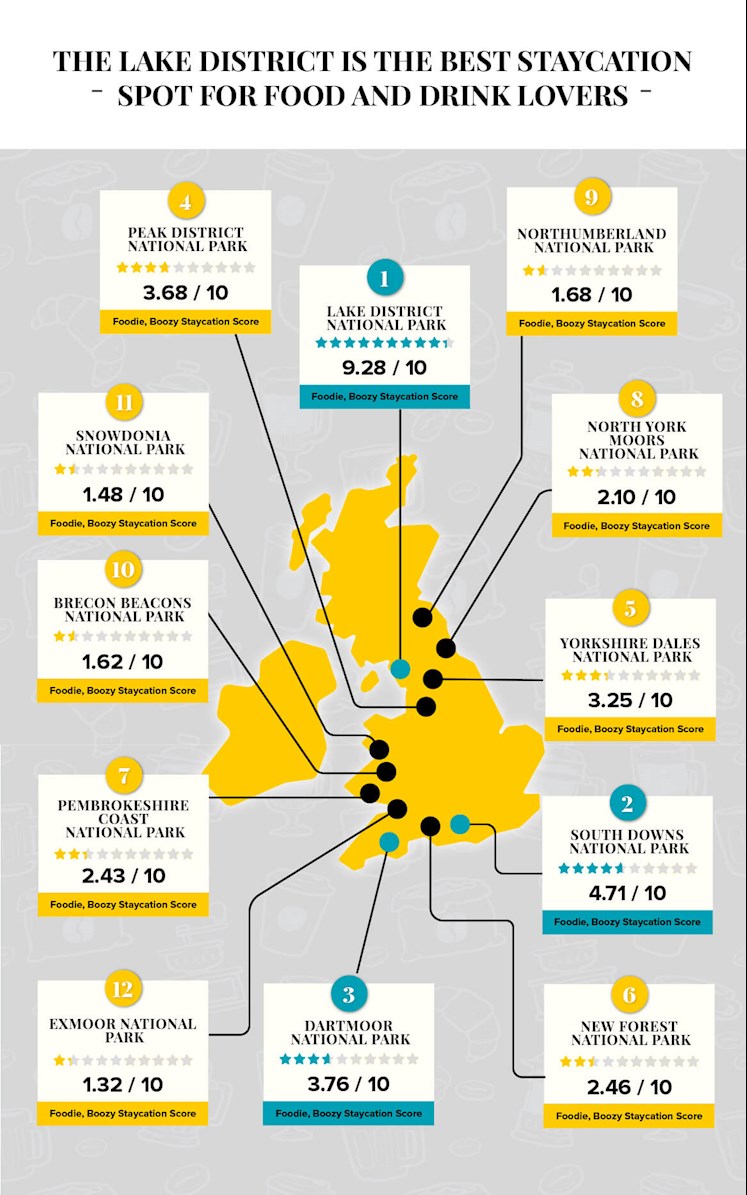 In the North West of England is the magical Lake District. The muse for many artists, poets and writers alike, the rolling Cumbrian hills are a stunning place for your next short weekend break in the lake district. If you’re into your food and drink too, the Lake District is the best place for you to explore. With 7 Michelin Star restaurants, 23 unique bars and pubs and over 1000 restaurants for you to choose from.

According to TripAdvisor, the top-rated food establishment in the Lake District is Fresher's Cafe in Ambleside, with outstanding British cuisine and a cosy atmosphere. When it comes to drinking, you will find the Westmorland Inn in Bowness-on-Windermere is the best rated with a wide gin selection, plenty of local real ales on the pump and a warm, friendly atmosphere for you to enjoy.

Secondly, the South Downs National Park in Southern England is the next best national park for food and drink. Covering an area of 1,627 square kilometres, the South Downs is one of the newest National Parks, only being given its status in 2009. Here you’ll find 18 bars and pubs and 52 restaurants to choose from as you explore the English countryside.

In South Downs, you should check out Comestibles when it comes to food and The Elsted Inn for drinking. Each has a unique and quirky atmosphere which will leave you wanting to go back time and time again.

Taking the third spot is the Dartmoor National Park in southwest England. There are 261 restaurants in the district and there are 9 breweries and distilleries in the area, the joint highest of any national park in the country.

Check out our index below to find out more about all of the UK’s National Parks. 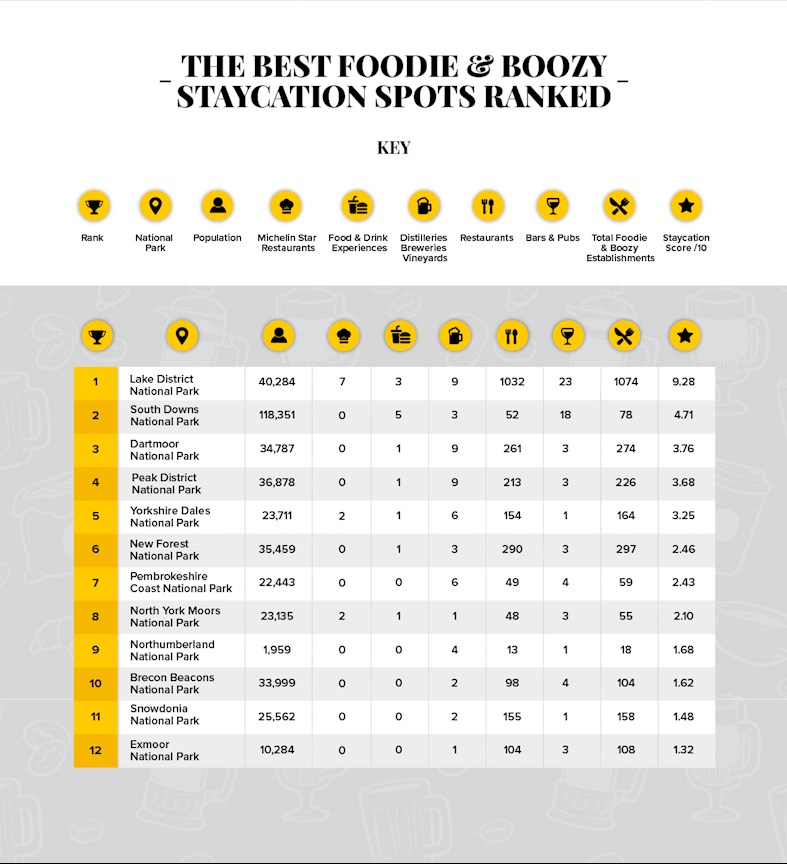 The best National Park for a Foodie holiday is…. 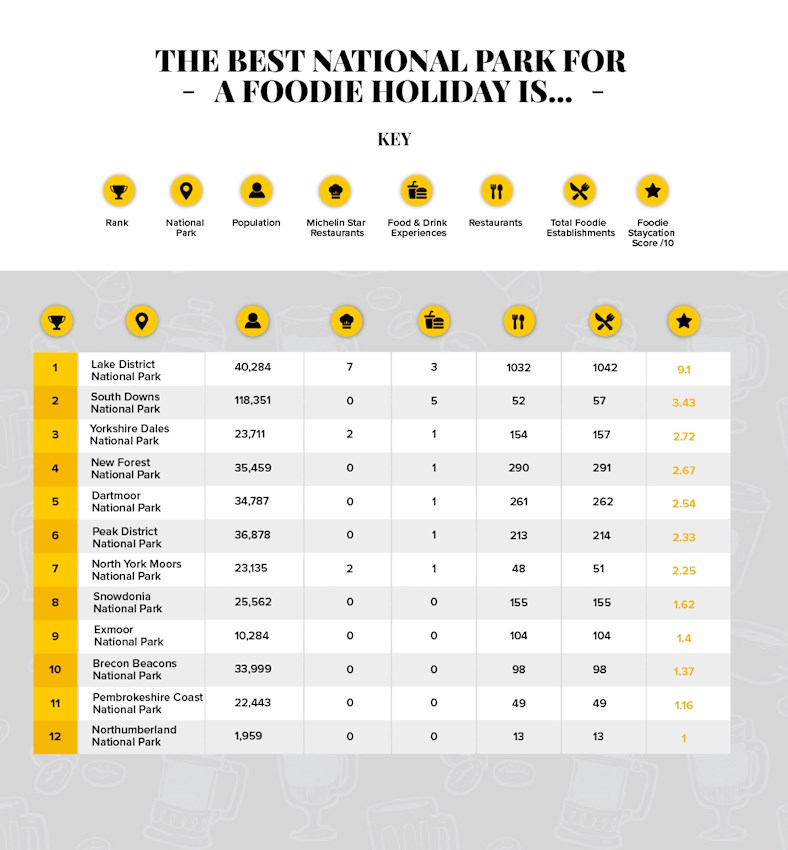 The top 5-star rated food experiences in each national park according to TripAdvisor:

The best National Park for a Boozy holiday is…. 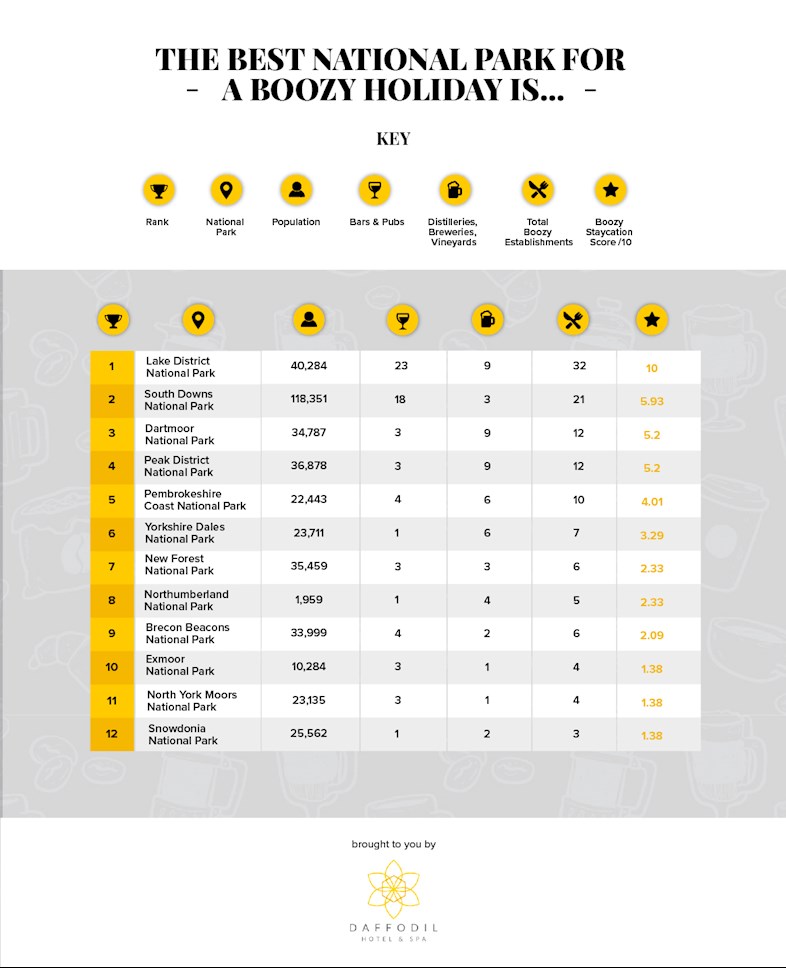 The top 5 star-rated drink experiences in each national park according to TripAdvisor:

Taking a list of all of the UK’s current National Parks and pairing it with the National Park population estimates dataset from ONS, we collected information on a range of features to create the UK Foodie & Boozy Staycation Index. We chose not to include The Broads Authority as this is mainly made up of rivers with a low population density and so there wouldn’t be enough data to accurately include this location in the research.

We also split the data into separate tables for just food and just drink to show which locations were the best for these types of holidays. The final scores are calculated using a weighted ranking formula that normalises the data and weighs it by the number of factors analysed (above). This normalisation and weighting are then calculated to get a score out of 10 to be ranked.